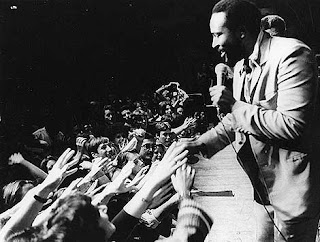 Marvin Gaye had one of the greatest voices in history. In my usual clunking way, I did not realize this until he was gone. Tragically murdered by his own father, I decided to do a salute to his work. Fantastic, even now 23 years later. I am still looking for his a capella version of the USA national anthem that he did before an LA Lakers game, the only time I ever liked that song, and it brought tears to many. Let me know if you have access to it.

(What’s Going On?, 1971)
A little bit softer now. “Picket lines and picket signs / Don’t punish me with brutality / Talk to me, so you can see / Oh, what’s going on?” Gaye delivered those words with a voice so supple, it’s easy to forget that What’s Going On? was as stirring a message of social protest as the outspoken works of Dylan, Curtis Mayfield or, well, anyone.
What’s Going On? described an impoverished land divided by war and prejudice. Its lyrics, co-written by Gaye, Renaldo Benson and Al Cleveland, keyed on family matters. Gaye’s marriage was failing; his duet partner, Tammi Terrell, had died; his brother had just returned from combat. The song’s plaintive repetitions of the words father, mother and brother made What’s Going On? feel simultaneously sweeping and intimate. “Father, father,” Gaye sang, meaning God or his own dad (father and son had a stormy relationship) or both. The song’s key line, however, came but once: “For only love can conquer hate.”

I think I found Marvin's national anthem, Dr. Tuna: http://avc.blogs.com/a_vc/2004/07/mp3_of_the_week.html Try that link. I got it… it's not totally acoustic, (there's a rhythm track) and there's lots of audience enthusiasm.

I may be able to send it to you in an email (it's less than 3 mb), but I'm not sure how to email you. My email is smugjuggler@yahoo.com. Nuff Respek!!