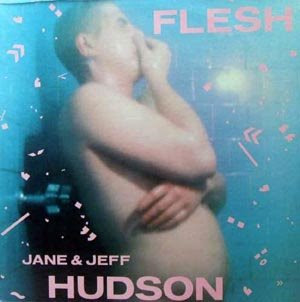 This week's program had a strange combination. Afrika Bambaataa had a new 12" record out ("World Destruction") and I liked the samples and the bonus tracks but I also featured a duo I had learned about, Jane and Jeff Hudson. I had Dennis Hudson as one of my students and he turned me on to their interesting electronic alternative work. I really liked it, although they never seemed to have much commercial success. This is just the kind of thing that the College of Musical Knowledge was created to memorialize. If you get a chance, check out Jane and Jeff Hudson.

About Jane & Jeff Hudson: The band performed in venues in Boston, New York and Philadephia. The music was electro-pop employing early Roland synths and the TR808 drum machine. For some performances, Wally Gagel appeared on drums with Russ Smith on bass. In 1985 the band stopped performing and recording. In 1986, Jeff started to direct music videos and Jane produced video art. Both were teaching at the School of the Museum of Fine Arts, Boston. In 1995, JEFF AND JANE reformed and performed for a couple of years and recorded again (ZETA BREW). The new music was more guitar-based and psychedelic. Jeff's project for 1998 was GIGANTOR, a trip-hop techno 3D video multimedia show. This show was performed at The Bank in New York and the Middle East in Cambridge.

About Bambaataa: Afrika Bambaataa is an American DJ from the South Bronx, who was instrumental in the early development of hip hop throughout the 1980s. Afrika Bambaataa is one of the three originators of break-beat deejaying, and is respectfully known as the "Grandfather" and "Godfather" and The Amen Ra of Universal Hip Hop Culture as well as The Father of The Electro Funk Sound. Through his co-opting of the street gang the Black Spades into the music and culture-oriented Universal Zulu Nation, he is responsible for spreading hip hop culture throughout the world."

Nice story as for me. I'd like to read more concerning this theme. Thnx for sharing this data.
Sexy Lady
Female escort

I really like this blog post, it has some great info. Thank you and keep up good work.

trading for a living

I bought a copy of this record at Burlington Records a couple days ago. Strange doings. My friend had Jane as a teacher during college.