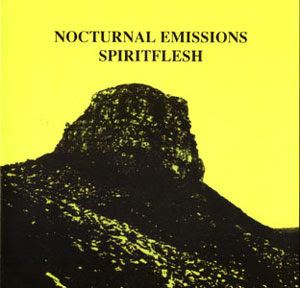 Some of the radio programs do not have dates on the tapes. While I often toss them out (after trying to determine the date) I keep them if they seem valuable and I want to preserve them. Thus it is with this program. I do not know when it came from (even my guesses are inaccurate) but I know that I like it. This is really some great industrial landscape stuff.

Here is a description of the project:

Nocturnal Emissions is a sound art project that has released numerous records and CDs in music styles ranging from electro-acoustic, musique concrete, hybridised beats, sound collage, post-industrial music, ambient and noise music. The sound art has been part of an ongoing multimedia campaign of guerrilla sign ontology utilising video art, film, hypertext and other documents. The project was initiated in London in or around 1980 by Nigel Ayers (b. 1957) together with collaborators Danny Ayers(b.1964) and Caroline K (b.1957- d.2008).
From early in their work, the group concentrated on the axiom of music being a form of social control, and highlighted concepts such as information overload, cult conditioning, brainwashing and subliminal advertising, in a critique of information society. Their music drew heavily on worldwide folk traditions as well as that of the European avant-garde. One of their earliest performances was in a railway arch in Atlantic Road, Brixton, while the 1981 Brixton riots raged outside.
Since 1984 Nocturnal Emissions has continued mainly as Nigel Ayers' solo project. Line-up has varied from one to a dozen musicians. Nocturnal Emissions temporary members have included net artist Stanza, Ben Ponton of Zoviet France and (somewhat bizarrely) life coach Fiona Harrold.
Nocturnal Emissions ran their own record label, Sterile Records and later worked closely with the editors of the art music label Touch, later with both the Netherlands- based Staalplaat and USA- based Soleilmoon recording labels. All three labels came to the fore as part of 1980s cassette culture. In 1990-92 Nocturnal Emissions collaborated on Butoh dance performances in Europe & the USA, with the Japanese choreographer Poppo Shiraishi. Around this time Nocturnal Emissions' Situationist-influenced practice became increasingly informed by magick, stone circles, techno-shamanism, neo-paganism, animism and Fortean research. There were many collaborations on animated films by Mancunian TV director Charlotte Bill. Bill was never an official member of Nocturnal Emissions, but admits to being one of the legion of members of The Fall (band).
Nocturnal Emissions were later to be associated with the Kernow section of the Association of Autonomous Astronauts and to feature in a best-selling story by the novelist Stewart Home.

You have really great taste on catch article titles, even when you are not interested in this topic you push to read it