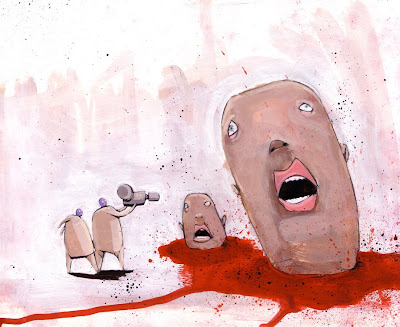 This was one of my first total sound-music collage programs. It took the theme of violence and spun it in many different ways. I took the speech that Robert F, Kennedy gave when he heard that Martin Luther King had been murdered as well as a speech delivered in Cleleland, and wrapped it around all sorts of music, other spoken word, the poems of indigenous people, punk music and everything else I could jam in. The result has remained potent for me these twenty-four years later. I coukld have done it a bit differently and a bit better, but this is what it is and it will have to do.

This is a time of shame and sorrow. It is not a day for politics. I have saved this one opportunity to speak briefly to you about this mindless menace of violence in America which again stains our land and every one of our lives.
It is not the concern of any one race. The victims of the violence are black and white, rich and poor, young and old, famous and unknown. They are, most important of all, human beings whom other human beings loved and needed. No one – no matter where he lives or what he does – can be certain who will suffer from some senseless act of bloodshed. And yet it goes on and on.
Why? What has violence ever accomplished? What has it ever created? No martyr’s cause has ever been stilled by his assassin’s bullet.
No wrongs have ever been righted by riots and civil disorders. A sniper is only a coward, not a hero; and an uncontrolled, uncontrollable mob is only the voice of madness, not the voice of the people.
Whenever any American’s life is taken by another American unnecessarily – whether it is done in the name of the law or in the defiance of law, by one man or a gang, in cold blood or in passion, in an attack of violence or in response to violence – whenever we tear at the fabric of life which another man has painfully and clumsily woven for himself and his children, the whole nation is degraded.
"Among free men,” said Abraham Lincoln, “there can be no successful appeal from the ballot to the bullet; and those who take such appeal are sure to lose their cause and pay the costs.”
Yet we seemingly tolerate a rising level of violence that ignores our common humanity and our claims to civilization alike. We calmly accept newspaper reports of civilian slaughter in far off lands. We glorify killing on movie and television screens and call it entertainment. We make it easy for men of all shades of sanity to acquire weapons and ammunition they desire.
Too often we honor swagger and bluster and the wielders of force; too often we excuse those who are willing to build their own lives on the shattered dreams of others. Some Americans who preach nonviolence abroad fail to practice it here at home. Some who accuse others of inciting riots have by their own conduct invited them.
Some looks for scapegoats, others look for conspiracies, but this much is clear; violence breeds violence, repression brings retaliation, and only a cleaning of our whole society can remove this sickness from our soul.
For there is another kind of violence, slower but just as deadly, destructive as the shot or the bomb in the night. This is the violence of institutions; indifference and inaction and slow decay. This is the violence that afflicts the poor, that poisons relations between men because their skin has different colors. This is a slow destruction of a child by hunger, and schools without books and homes without heat in the winter.
This is the breaking of a man’s spirit by denying him the chance to stand as a father and as a man among other men. And this too afflicts us all. I have not come here to propose a set of specific remedies nor is there a single set. For a broad and adequate outline we known what must be done. “When you teach a man to hate and fear his brother, when you teach that he is a lesser man because of his color or his beliefs or the policies he pursues, when you teach that those who differ from you threaten your freedom or your job or your family, then you also learn to confront others not as fellow citizens but as enemies – to be met not with cooperation but with conquest, to be subjugated and mastered.
We learn, at the last, to look at our bothers as aliens, men with whom we share a city, but not a community, men bound to us in common dwelling, but not in common effort. We learn to share only a common fear – only a common desire to retreat from each other – only a common impulse to meet disagreement with force. For all this there are no final answers.
Yet we know what we must do. It is to achieve true justice among our fellow citizens. The question is now what programs we should seek to enact. The question is whether we can find in our own midst and in our own hearts that leadership of human purpose that will recognize the terrible truths of our existence.
We must admit the vanity of our false distinctions among men and learn to find our own advancement in the search for the advancement of all. We must admit in ourselves that our own children’s future cannot be built on the misfortunes of others. We must recognize that this short life can neither be ennobled or enriched by hatred or revenge.
Our lives on this planet are too short and the work to be done too great to let this spirit flourish any longer in our land. Of course we cannot vanish it with a program, nor with a resolution.
But we can perhaps remember – even if only for a time – that those who live with us are our brothers, that they share with us the same short movement of life, that they seek – as we do – nothing but the chance to live out their lives in purpose and happiness, winning what satisfaction and fulfillment they can.
Surely this bond of common faith, this bond of common goal, can begin to teach us something. Surely we can learn, at least, to look at those around us as fellow men and surely we can begin to work a little harder to bind up the wounds among us and to become in our hearts brothers and countrymen once again.

I have bad news for you, for all of our fellow citizens, and people who love peace all over the world, and that is that Martin Luther King was shot and killed tonight.
Martin Luther King dedicated his life to love and to justice for his fellow human beings, and he died because of that effort.
In this difficult day, in this difficult time for the United States, it is perhaps well to ask what kind of a nation we are and what direction we want to move in. For those of you who are black--considering the evidence there evidently is that there were white people who were responsible--you can be filled with bitterness, with hatred, and a desire for revenge. We can move in that direction as a country, in great polarization--black people amongst black, white people amongst white, filled with hatred toward one another.
Or we can make an effort, as Martin Luther King did, to understand and to comprehend, and to replace that violence, that stain of bloodshed that has spread across our land, with an effort to understand with compassion and love.
For those of you who are black and are tempted to be filled with hatred and distrust at the injustice of such an act, against all white people, I can only say that I feel in my own heart the same kind of feeling. I had a member of my family killed, but he was killed by a white man. But we have to make an effort in the United States, we have to make an effort to understand, to go beyond these rather difficult times.
My favorite poet was Aeschylus. He wrote: "In our sleep, pain which cannot forget falls drop by drop upon the heart until, in our own despair, against our will, comes wisdom through the awful grace of God."
What we need in the United States is not division; what we need in the United States is not hatred; what we need in the United States is not violence or lawlessness; but love and wisdom, and compassion toward one another, and a feeling of justice toward those who still suffer within our country, whether they be white or they be black.
So I shall ask you tonight to return home, to say a prayer for the family of Martin Luther King, that's true, but more importantly to say a prayer for our own country, which all of us love--a prayer for understanding and that compassion of which I spoke.
We can do well in this country. We will have difficult times; we've had difficult times in the past; we will have difficult times in the future. It is not the end of violence; it is not the end of lawlessness; it is not the end of disorder.
But the vast majority of white people and the vast majority of black people in this country want to live together, want to improve the quality of our life, and want justice for all human beings who abide in our land.
Let us dedicate ourselves to what the Greeks wrote so many years ago: to tame the savageness of man and make gentle the life of this world.
Let us dedicate ourselves to that, and say a prayer for our country and for our people.