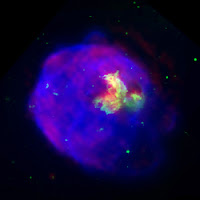 This is a very low-key show, with a lot of instrumentals of a spacey variety. Good for working or reading as it is not too intrusive. Not sure who all the artists are on it, but many of them are unknown to me now, which makes this a sort of lost gem from the CMK universe.

From
http://www.cnes.fr/web/5591-harmonics-in-the-universe.php
Harmonics in the Universe
8 December 2006
The Universe is not uniform, and indeed it never has been, even in its early youth just 300,000 years after the Big Bang. It is as Professor George Smoot predicted and proved through his research based on data from the COBE satellite. In recognition of his work, Professor Smoot has been awarded the 2006 Nobel Prize for Physics.
When the Universe rang
Before the COBE mission, scientists thought that the CMB was a universal thermal radiation field with a temperature of about 3°K, but this theory did not fit observations of the modern Universe.
After 2 years of observations and analyses, George Smoot and his team published a sky map dotted with strange pink and blue patches representing the tiniest temperature variations in the CMB, of the order of 1/100,000th of a degree. Although very subtle, these variations support a model of the Universe that is no longer perfectly uniform and drive a mechanism of gravitational instability which, by causing matter to accrete, gradually leads to the formation of structures like galaxies.