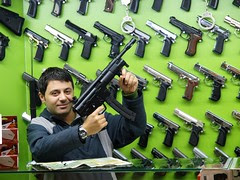 Image by paljoakim via Flickr
"Those who were foolish enough to ride the tiger, ended up inside." John F. Kennedy

Some people are so dangerous with their words that they have to be killed. Malcolm X, Martin Luther King, John Lennon,  Mahatma Gandhi, on and on and on. Add John F. Kennedy and his brother Robert to that list if you want. Whoever said something was "just words" did not understand the power that words have. Had it not been for their words, these people would not have been killed, gunned down by their assassins who hated them because of their words and what they stood for.

Sometimes the tiger you should not ride is the words you feel in your heart.

23 November 1963 an American president was shot. This program is 25 years later.

The names and faces might change, not to protect the innocent by the way, but things seem to remain much the same.

Posted by Alfred Charles Snider at 3:46 AM