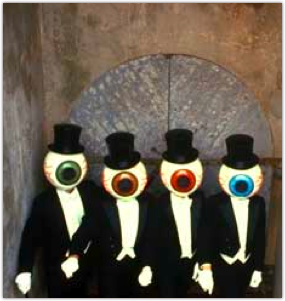 The 25th anniversary of The Residents was the occasion, and this is the radio program saluting their career.

Over the course of a recording career spanning several decades, The Residents remained a riddle of Sphinx-like proportions; cloaking their lives and music in a haze of wilful obscurity, the band's members never identified themselves by name, always appearing in public in disguise -- usually tuxedos, top hats and giant eyeball masks -- and refusing to grant media interviews.
There are many things not known about The Residents, however these are not among those things. These are entirely different things not known.

• The Residents released the first ever punk single, “Satisfaction,” back in 1976, a full year before the Sex Pistols’ UK release of “God Save the Queen.” England’s MOJO Magazine recently voted The Residents' Satisfaction as the 74th most important punk single in history.
• After recording an entire album of songs that were one minute long in 1980, The Commercial Album, the group purchased one minute advertising spots on San Francisco’s most popular Top 40 radio station and had the entire album, all 40 songs, played by the station over a period of three days. Billboard Magazine wrote an editorial about it questioning whether it was advertising, payola, or art.
• The Residents are credited with “inventing” the form of the music video. Five of their earliest videos are in the permanent collection of the Museum of Modern Art in New York.
• In 1991 The Residents released their album, Freak Show. In a show of media strength it came out as an LP, CD, soft and hard bound graphic novels, video, award winning CD-ROM, and a live production that ran for 21 performances at the Archa Theater in Prague, Czech Republic.
• The Residents, in 1993, wrote a ten hour score for The Discovery Channel nature show, Hunters.
• They have also scored 5 shows of Pee Wee’s Playhouse and assorted things for MTV.
• Two years in a row, they won awards from Entertainment Weekly magazine for top computer entertainment software. 1995: Freak Show CD-ROM, 1996: Bad Day on the Midway CD-ROM.
• In 2002 The Residents released their first DVD, Icky Flix. It was NOT concert footage.
• Penn Jillette (Penn & Teller) was part of the touring Mole Show in 1982-3.
• Marlboro cigarettes commissioned a performance piece for a German promotion in 1997, Disfigured Night. Paranoid that the group was making fun of them, Marlboro asked that there be no appearance by Residents’ regular, Mr. Skull.
• The album Eskimo was in the final list for nominations for a Grammy Award in 1980. It did not become an actual nominee, however. Still The Residents were invited to the ceremonies and party and shared a table with Donna Summer.

I hope you enjoy this. I did.